A History of Trinity Episcopal Church in Belleville Michigan

The history of Trinity Episcopal Church in Belleville Michigan began in 1884 when Violet Clark, the daughter of a Quaker father and an Episcopal mother,  traveled to Ypsilanti to ask the rector of St. Luke’s to conduct Episcopal services in Belleville.  The Rev. Thomas W. MacLean agreed, and held services at 3:00pm, on Sunday afternoons, in the Baptist church at Main and Third Streets for a group of Episcopalians which became known as Grace Mission.  Rev. MacLean and other clergy from St. Luke’s continued to hold Sunday afternoon services until sometime in 1890. 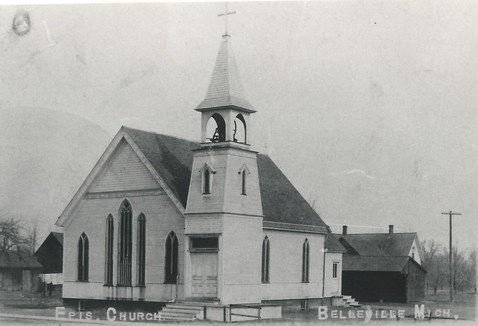 Grace Episcopal Church 1890
Grace Mission, wanting a church of their own,  erected a  wooden church on a lot they purchased at Main and First Streets in Belleville in 1890.  St. Luke’s donated an altar,  windows and a lectern. The Gothic-style sanctuary seated 200 parishioners.
Violet Clark’s brother,  William A. Clark of Bay City,   donated a bell for the church’s  belfry in 1892, in memory of their mother Sophia Clark, who died in 1881.

The Bell is engraved:

The Gift of Wm. Clark, Bay City
to the Episcopal Church in Belleville
in Memory of his Mother, Sophia Clark
who died on April 10, 1881

For a while, services were held in the farmhouse of Aleck and Frances Shook, followed by the Seventh Day Adventist Church and then in the Van Buhler’s ice  cream parlor.   Aleck Shook served as lay reader, and an ordained priest came once a month for a Eucharist. 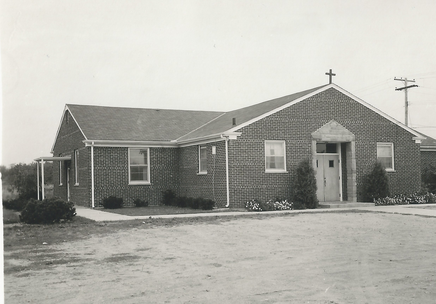 In 1947, under the direction of Rev. William Saunders, planning started for the construction of Trinity Episcopal Church, on land donated by Earl and Ruth Jacox at the corner of Belleville Road and Venetian Road, (the present location). In 1948 the Rev. James B. Guinan joined the congregation as its first resident, full time,  priest. Ground was broken in June of 1950, and the first service, in the new Trinity Episcopal Church, was held on June 14,  1951.

The little Church served the parish for nearly 9 years with Church services,  Church school classes, adult classes, meetings, and social functions including church suppers and children's parties.  It was soon realized the church was too small as classes overflowed into the kitchen area and various parish organizations were forced to meet outside because the church was used every night of the week. Records of the era mention 200 children registered in the church school. 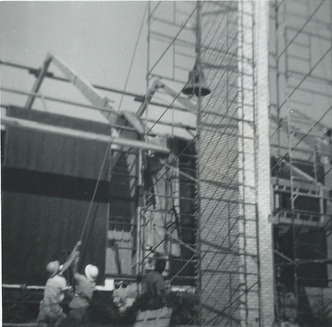 During construction, the bell from Grace Episcopal Church, that had been stored in the Shook (Clark) family barn after its removal in 1921, was  carefully lifted and placed high in the new Sanctuary’s Bell Tower, serving to directly link the new Trinity Episcopal Church and the old Grace Episcopal Church that was started in 1884.
With the installation of the bell complete, it was now time for the finishing touch - the laying of the cornerstone.  In a special ceremony, held on September 11, 1960, the cornerstone was mortared in place after the following items were placed inside:

The Cross of Christ, By Aleck Shook - Senior Warden
The Holy Bible, By Merrill Bird - Junior Warden
The 1928 Book of Common Prayer, by Mabel Ridley, Alter Guild Directress
The Record of Founders, by the Vicar, The Rev Charles Schmidt

To mark the completion of the ceremony and while the congregation rejoiced,
Henry Amrhein, church treasurer and former bell ringer from Grace Church, officially rang the old bell, in its new home at Trinity,  for the first time in 39 years.

Trinity Episcopal Church officially became a parish of the Episcopal Diocese of Michigan on September 24th, 1959 and the first services  in the new sanctuary were held on Christmas Eve in 1960.
In 1962/63 a new rectory was  built on the church’s property and the Rev. Robert MacDonald became the first  resident in June of 1963.

In 1987, under the direction of Rev. John Hagan, a decision was made by the Vestry, that flourishes to this day; the Vestry set a goal of
“50/50 GIVING” with the hope that we would give away as many of our resources as we keep for ourselves - it was decided that 50% of the proceeds from the strawberry festival would be set aside for outreach.

On August 11, 1993, in a ceremony held to commemorate the 50 year anniversary
of Trinity Episcopal Church, members of the congregation carefully removed and opened the cornerstone laid by the congregation of the church back in September of 1960. To their surprise there were a number of other artifacts not mentioned in the 1960 records: The Record of Founders contained the signatures of all who were present at the 1960 ceremony, building plans, the front page of the Enterprise-Roman dated September 7, 1960,  a Church Brochure, a Sunday bulletin dated September 11, 1960, the Church's 1959 Annual Report and a parish Handbook. On October 17, 1993  the artifacts were replaced with the addition of a number of similar items of  the present time, and a Trinity Cross. Re-enacting the 1960 ceremony,  the cornerstone was replaced in its original location, and the Church bell was rung 50 times. 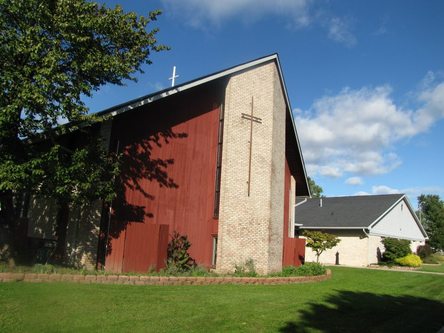 In 2001, the 50 year old church/parish hall was torn down and a  new parish  hall was built.  The  new, air conditioned, parish hall included a  nursery, offices, meeting rooms,  classrooms, store rooms, a kitchen and  bathrooms to support a thriving  congregation focused on outreach and  children’s ministries.